There was the hype on Kickstarter and then there was relative calm for 6 months whilst 3doodler sorted their thousands of orders ready for shipping. The 3dprinting pen that had created a storm of interest was about to be tested and let loose in a Bolton classroom. Myself and the Art Teacher both placed an order and had waited in anticipation for them to arrive. After a few delivery mishaps and customs clearances the 3doodler had landed.

When you first take it out the box it’s quite big thing. It’s more of a stylus rather then pen and was very easy to set up. It’s was almost fool proof actually, you simply plug it in, wait for the green light and load a PLA/ABS stick of into the end of the pen. Then it’s simply up to you what you create (or should that be #whatwillyoucreate ). It’s actually not the easiest thing to operate at first, you have to spend a few minutes getting used to the speed of the plastic extruding and also you need to feel out the correct amount of pressure to apply when drawing a 3d object. The videos from 3doodler make it look so easy!!! Once you have your technique then the world is your oyster……

Myself being a technology teacher one of the first things I decided to do was take the thing apart. Its pretty basic on the inside and was simple to put back together. One thing that could be an issue after a few years of using one is the build up of filament dust internally. We had only been using it for a few weeks and somehow the inside showed signs of the filament residue 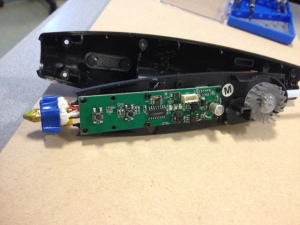 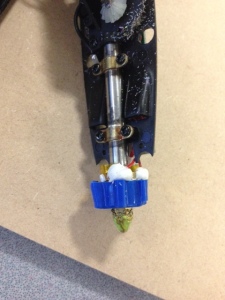 However once you get started with this pen its great fun. It is almost therapeutic, you can escape the world of reality and express your creative genius with no limits to what you can create. The only limit is your imagination. Below is the effort by Chet Mistry the Art teacher. In class the students went wild for it and I had a waiting list of pupils wanting to doodle. It is actually a good tool to ensure children work to their highest potential…. just bribe them with the phrase ‘show effort and commitment in lesson with your work and you can have ten minutes on the 3doodler pen’. It worked a treat. This is great fun and is an excellent creative tool, I just hope the material price is cheap and affordable so we don’t have to worry about the cost of running the pen.

My final verdict is a thumbs up for the 3doodler pen. Also a big thanks to http://www.goprint3d.co.uk/ for donating a pen to the school.

One thought on “3doodler – The kids just love it… so do the teachers.”